Swimmer Andrew Mullen is setting his sights on Paralympics Gold thanks to the loyal support of housebuilder Mactaggart & Mickel.

Amid the uncertainty created by the coronavirus pandemic, the Scot says he has been freed to fully focus on the road to this summer’s Paralympic Games in Tokyo thanks to sponsorship from the family-owned Glasgow-based company.

Mactaggart & Mickel have extended their backing for Andrew for a fourth year as he gets ready for his third Paralympics, having already competed in the 2012 London Games and four years later in Rio, where he won a silver and two bronze medals.

But now, the 24-year-old hopes to achieve the ultimate sporting goal in Japan – and insists Mactaggart & Mickel’s support will help him bring gold back to his family home in Newton Mearns, in the Southside of Glasgow.

“The Mactaggart & Mickel sponsorship has been massive in allowing me to fully dedicate my time towards preparing for the Paralympic Games,” Andrew said.

“Due to Covid 19, the current climate has resulted in lots of uncertainty for athletes, but Mactaggart & Mickel’s support however has been a constant for me and is always greatly appreciated.

“The way they have put their faith in me has meant so much because it takes a lot of stress away so I can focus on swimming, and the fact I know they believe in me will certainly spur me on.

“It could make all the difference. I know from experience that there is a very thin line between success and failure, and I’ll give it all I’ve got to do my country proud in Tokyo by winning gold.”

Due to the coronavirus pandemic, the Games had to be postponed by a year, but The City of Glasgow Swim Team member has refused to dwell on the disappointment.

“Once the pandemic took on a global dimension last year, the writing was on the wall and I was braced for the Games to be delayed or completely called off,” Andrew said.

“It was disappointing and frustrating because it’s something that I’ve been really focused on for four years, but in the grand scheme of things, a year delay isn’t the end of the world.

“Plus, it’s important to put things into perspective – people are having it a lot worse at the moment, right from my fellow Scots losing their livelihoods to people losing their lives across the world.

“I’m being positive and the way I see it we’ve been given another year to prepare – I feel as though I’m in a privileged position and if that’s the biggest worry then you’re doing alright.”

The former Mearns Castle High School pupil spent 18 months in the National Performance Centre in Manchester getting ready for the 2016 Paralympic Games.

Andrew has been studying Finance, Investment & Risk at Glasgow Caledonian University, but chose to defer his studies in order to focus on swimming.

He has also changed his strategy and narrowed his focus in a bid to win gold at Tokyo and is concentrating on three 50 metre events in butterfly, freestyle and backstroke rather than tackling two additional 100m and 200m events as well which he did in Rio.

But he continues to train as hard as ever – despite the fact that he still hates getting out of bed in the middle of the night while most people are still tucked up.

“I’ll probably never relish getting up at 4.30am, but once I get into the pool and get into the swing of things, I’m fine because I still love swimming and I love being among swimming people,” Andrew said.

“I really missed it when lockdown first came into play last year and there was no swimming pool access at all.

“I had to rely on cross-training at home but thankfully that didn’t last too long, and we got access to pools back quite quickly at the Stirling performance centre and then in Glasgow.

“There have been no race meetings for ages, so we’ve had to rely on time trials as you’re missing out on proper competitions.

“But once we got back our pool access, it’s been relatively plain sailing and I’ve really tried to look after myself away from the pool.”

Andrew swims eight or nine times a week and there are two weekly gym sessions to squeeze in, and he is certain the hard work will pay dividends.

“I owe it to myself, my family, my coaches, and Mactaggart & Mickel as sponsors to repay their faith and give it everything I’ve got to deliver my best performance in Tokyo,” Andrew said.

“I’ve always worked incessantly at bettering myself and I feel more determined than ever to do well. I just need to stay disciplined and focus on the processes to make sure I give it my best shot.” 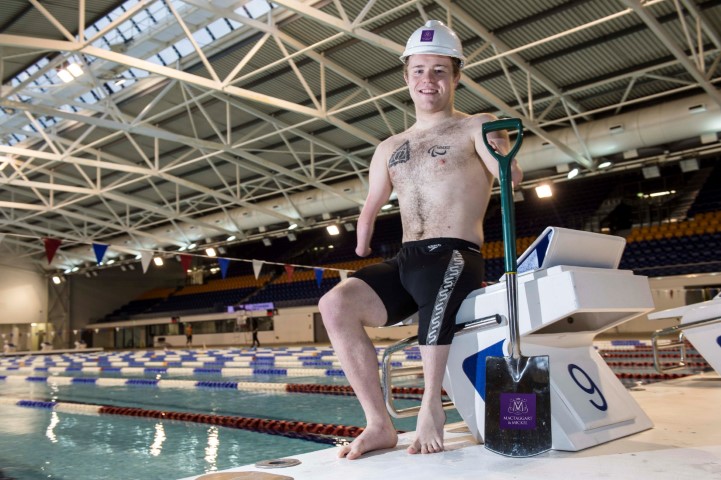 Mactaggart & Mickel Director Joanne Casey paid tribute to Andrew, adding: “We have a history of supporting people in communities like Newton Mearns where we are building new homes through our Building Communities Fund.

“Andrew’s an inspirational figure because he’s dedicated himself to the pursuit of sporting excellence and like Mactaggart & Mickel he’s working his way through the pandemic.

“We are all delighted to have extended our sponsorship of one of our own sporting heroes for a fourth year, at a time when he needs our support more than ever.

“It’s great to know we’re making a real difference to Andrew and we’re confident he has what it takes to do Great Britain proud at the Paralympic Games. We’ll be cheering him all the way, hopefully to the top of the podium.”